Using a status match that took only 15 minutes to complete, I received United’s lowest level elite status a few months ago.

Here are the benefits of the various levels of United elite status.

The benefit I cared about the most was getting free access to United’s Economy Plus seats, which have a few extra inches of leg room.

Even as a lowly Silver, each United flight I take I’m put on the list to be upgraded to First or Business class.

But still, I think I scored an Economy Plus seat on every flight, which I’m grateful for.

As a Silver, you can’t select a free Economy Plus seat until check-in.

So for this flight that I took this week, I was able to select exit row seat 21F for free at check-in, while this is what it would’ve costed to select an Economy Plus seat ahead of time:

Side note about United’s B737-900: Economy Plus seats on the D-F side of rows 8-12 do not appear to have extra leg room, as people have mentioned on seatguru.com. How do they get away with that? I’ll bring my measuring tape next time to confirm.

Why didn’t you get any upgrades to First or Business?

Apparently a ton of people have United statuses that are a higher level than mine, the majority of whom are business travelers doing it up on company dime.

Even on a holiday-week redeye flight that you wouldn’t think many business travelers would be on, I was number 5 on the upgrade list.

I checked in right at the 24-hour mark, but still started at number 2: 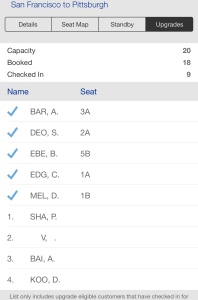 I think the people with the check marks are high-level-elite fliers who got immediate confirmed upgrades before check-in even started.

Most flights I was between numbers 10 and 20 on the upgrade list.

It was by pure chance and a little effort that I was able to fly the 8 segments within 3 months required to extend my matched elite status through all of next year.

How were the flights?

United has a horrible reputation with many people, and I had bad experiences the previous few times I’d flown them.

But I gotta say, these 10 flights were unremarkable, which I see as a good thing when flying.

No delays that were United’s fault, no incidents.

A sunny day in line to take off at SFO.

The Economy Plus seats were the only benefit I used, which alone I found worth the effort of completing the status challenge to keep the status through next year.

I didn’t check any bags, but the one free checked bag could potentially be valuable.

So I’ll appreciate it while I have it.

And these olive bites one of the flights had? Wow, very good.

If you have any thoughts on United elite status, I’d love to hear them.

One thought on “After 10 flights, a review of United’s Silver elite status”