A crisp New Year’s Eve afternoon, we sat parked a few blocks from Lands End, in the front seats of our rented Jeep Wrangler, waiting for the police officer to arrive.

The glass from our smashed-in back window was sprinkled on the seat behind us as three of our four pieces of luggage sped off somewhere in the hands of devils.

Three park policemen on horseback came clopping by us.

I thought one of them might ask if we were okay, but instead, we just heard one of them chuckle knowingly as they continued past us.

Fifteen minutes earlier we’d been relishing the weather and views of one of our favorite places on earth: 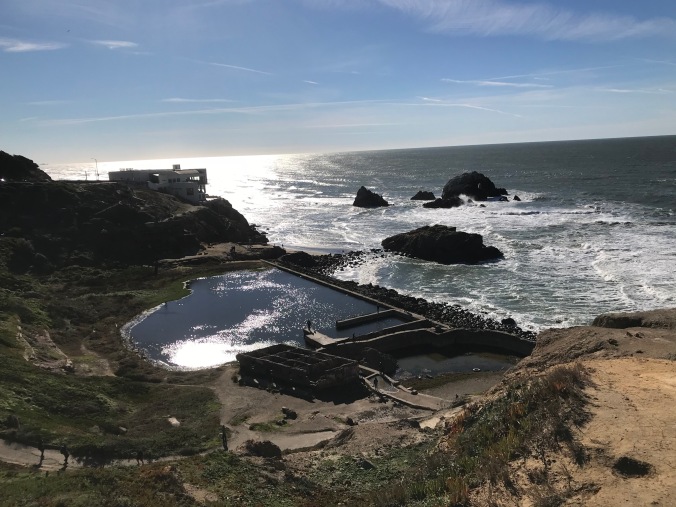 I put off writing this post for 15 months for a few reasons:

So why did you leave your bags in your car if you were aware of the risk?

That’s a question I still struggle with.

Ten minutes prior to parking there, I’d stayed in the car while my fiancée ran in to Purple Kow, our favorite boba tea place, because I was anxious about having our bags in the car.

But when we saw an open street parking spot on what seemed like a safe, populated residential street a few blocks over from Lands End, the excitement took over. I blocked out my better judgement.

The fact that we were near a tourist attraction was obviously a major red flag, but I blocked it out.

We could surely just run over, breath in the beloved view of the Golden Gate at the mouth of the San Francisco Bay, then come back. Right? Fifteen minutes tops.

We knew there was always a risk, but surely the odds of something happening, in that short of a time, were fairly small, right?

How many bands of bandits could be prowling this particular San Francisco street at any given time?

Here is a tracker from the SF Chronicle that shows the number of reported car break-ins in each area of San Francisco.

So what happened next?

After briefly enjoying the park, we headed back to the car.

We were trudging up a hill when I looked up toward the car, and my heart jumped into my throat.

We got to the car to find the back window smashed in, two backpacks and a suitcase gone. They left one suitcase, I’m guessing because they figured it was just clothes — they were right — or because another person came by, and they had to vacate before they could grab it.

We received a commiserative chiding from each of the two separate neighborhood residents who walked their dogs by us as we stood over the broken glass deciding what to do next.

Here is a fascinating Inside Edition segment showing how these thieves do the thieving.

What possessions did you lose?

The main things were a passport, the only key to my car back home, two laptops, a Kindle, and some Bose headphones.

In the weeks that followed, I tried to focus on how much things like this don’t really matter considering some robberies end with health or lives being lost.

We got a call later that night from SFPD, saying that my fiancée’s backpack was found, and it had her passport still inside. We went over to the station in Richmond to get it.

More surprisingly: a saint of a dentist found my carryon suitcase abandoned on a sidewalk and took it to his office. My nerdy Fairmont name tag was on it, so he contacted Fairmont, which contacted me a few days after getting home to the east coast.

It contained mostly clothes, but a San Francisco friend of mine picked it up and held it for me until I was back in the area a couple of months later. The contents of the bag looked untouched.

The woman from the non-emergency number told me I could wait for an officer if I wanted, or just submit a report online (her preference), or come to a station to submit a report.

We waited about 15 minutes for an officer to show up, and he actually took our case more seriously than I expected.

He didn’t dust for fingerprints or anything, but he did look at the car, make some calls, and explain to us what to expect from the situation.

What about your Jeep?

This was my first time driving a Wrangler, and I really enjoyed it until the incident. It was the cheapest option from the Fox rental place at Oakland’s airport. Somehow it was only $44 for two days, using Autoslash.

After the police officer left, I took the drive of shame down Ocean Beach with my rear windshield wiper dangling in my gaping window, toward the Fox rental location at SFO.

The guy at Fox SFO said I was something like the eighth smash & grabbed car to be returned to them that day.

He gave me another Wrangler.

I felt guilty about what happened to my first Jeep, but it was hard not to think this maybe would’ve not happened if I’d just rented a normal car with a trunk like I did 13 out of the 15 other times I’d ever rented a car.

Our peaceful first evening with the Wrangler, crossing the Bay Bridge.

Was this the first time you’ve had a window smashed in San Francisco?

I had my window smashed a couple of years earlier on a mildly sketchy street in the SoMa area where I parked my car a few times per week for music rehearsals.

Luckily there was nothing in my car to take that time, and my windows weren’t tinted, so I suspected it was just a random junkie attack.

After that time I’d started doing the thing where you tape notes inside your car windows saying “Please don’t smash my window, I promise I have nothing in here.”