In only its 10th year, San Francisco’s Outside Lands festival has quickly built itself a prominence rivaling the Coachellas, Lollapaloozas, Bonnaroos and Glastonburys.

It wasn’t all sunny vibes this year though, as legendary American hip-hop group A Tribe Called Quest canceled their Saturday main stage set, a move that was announced to fans about 10 minutes before the scheduled set.

Brits and Aussies ruled the festival instead, with headliners Alt-J and Gorillaz on Friday, Aussie artist Empire of the Sun on Saturday, and The Who and Above & Beyond on Sunday.

Here are some photos.

END_OF_DOCUMENT_TOKEN_TO_BE_REPLACED

Alcatraz is rocky and squawky and is ruled by birds.

During the summer it may be another box on a tourism checklist, but the rest of the year it’s one of many natural escapes in the arsenal of Golden Gate National Parks.

END_OF_DOCUMENT_TOKEN_TO_BE_REPLACED

Hilton announced a bunch of changes to its loyalty program yesterday (here and here are good summaries).

It got me checking out the new program, now called Hilton Honors instead of the old Hilton HHonors with the weird double H.

END_OF_DOCUMENT_TOKEN_TO_BE_REPLACED

If you dreamed of being an astronaut when you were a kid, this may be the next best thing: Uber needs operators for its self-driving cars.

Uber introduced self-driving cars in Pittsburgh a few months ago, and now they’re in San Francisco as well.

Don’t worry, you’ll still have a human in the driver’s seat.

They just won’t be driving. They’ll be enjoying the sights with you.

Here is the Q&A Uber sent out today: 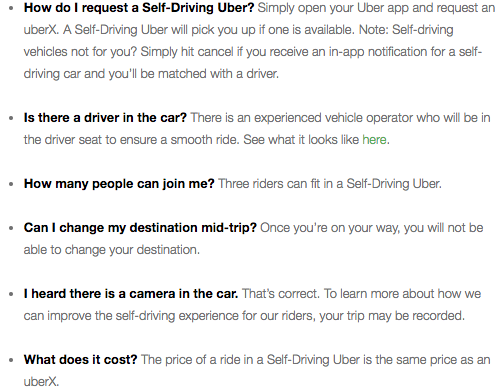 END_OF_DOCUMENT_TOKEN_TO_BE_REPLACED

Uber users in this approximate area will now see UberPool, UberX and UberXL fare increases of 20%:

END_OF_DOCUMENT_TOKEN_TO_BE_REPLACED

I’ve heard a lot of people talk about Virgin America as their favorite airline.

The Bay Area-based airline is popular for its quirky style, friendly employees and reliable air service.

I finally got a chance to fly with Virgin America recently, from SFO to Dulles.

Does it live up to the hype?

END_OF_DOCUMENT_TOKEN_TO_BE_REPLACED

When there are more drivers than ride requests at the airport, Uber makes drivers park in a cell phone waiting lot where they enter a digital queue in order to receive requests. 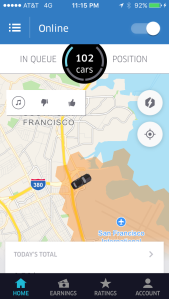 Problem is, at SFO the waiting lot is about a 10-minute drive away, so passengers usually have to wait at least that long after requesting a ride home. END_OF_DOCUMENT_TOKEN_TO_BE_REPLACED

Driving over a Golden Gate Bridge steeped in fog, I was confused at the lack of traffic.

People in cars were flying through the rush-hour wind like they could see for miles.

I could only see the car in front of me. END_OF_DOCUMENT_TOKEN_TO_BE_REPLACED

Frontier is a weird airline. They have 50% off sales that require promo codes. Round-trip flights for $30. They charge for carry-on bags. And they are one of the last airlines to still have a miles-based loyalty program (only a few days left of this for American).

Now, they are offering double loyalty miles on all flights through September 30. END_OF_DOCUMENT_TOKEN_TO_BE_REPLACED