They used to send you a grid that showed you the cheapest rates, like this: 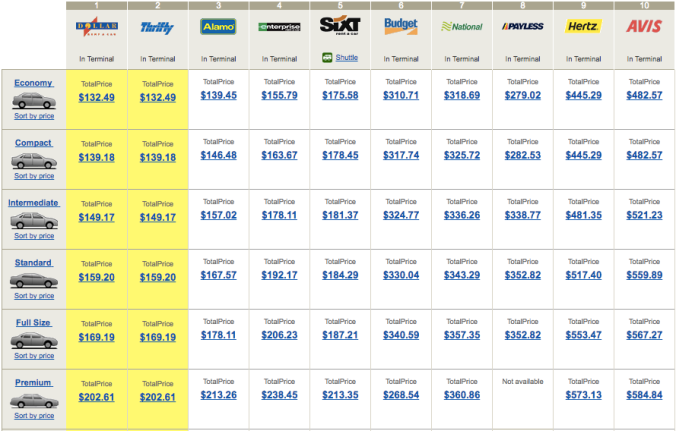 Now they just give you a Priceline link, like this:

I was initially aghast at what seemed to be a majorly negative change.

After looking into it, it’s not so bad. Just different.

Why did this change happen?

According to AutoSlash: “Because of the fantastic deals that we find for our customers, the major rental companies have recently refused to allow us to book reservations directly with them.”

Basically, they were finding deals so good the rental companies were getting miffed.

What are the changes?

Instead of using a Travelocity-based reservation system, AutoSlash now uses Priceline to input all of the discount codes they find for you, after which they send you the link with your deal ready to book.

According to AutoSlash, these aren’t the same rates you would find if you searched on Priceline.

They still do the work of finding discounts and inputting them into Priceline for you.

Your rental is no longer automatically tracked by AutoSlash to find a better deal.

To have AutoSlash track your deal, you have to manually input the rate you booked in AutoSlash’s tracking system.

With that said, I found out this week that having them track your rental is very worth it:

I’ve never driven a quote unquote luxury car, so I’m pretty grateful. Unless I wreck it.

Anyhow, it seems AutoSlash is still working out some kinks in Priceline’s system, as it also recently sent me some random “price slashes” that weren’t actually improved rates when I clicked on the link.

None yet, but AutoSlash claims this change could eventually provide improvements in the choices that renters have.

“Eventually, we expect to expand the list of available booking choices,” they told me today in an email.

As an avid AutoSlash user, I can say they still have the same awesome customer service they’ve always had.

I’ve contacted them several times with different questions, and they always get back to me quickly with a genuine, personal answer.

They even researched the rental insurance situation in Mexico for a specific question I had one time.

Here is a FlyerTalk post from an AutoSlash rep explaining the change.

Have you used AutoSlash recently?

3 thoughts on “AutoSlash has changed, but it still works”