One study found only 4% of drivers are still driving a year after starting.

Most drivers join for the lucrative sign-up bonuses, then ditch upon realizing how challenging it is to make driving worth their time.

Here are 3 changes Uber could make to keep drivers on the road:

1. Compensate drivers for the miles driven on the way to pick up passengers.

Driving five miles to pick up a passenger only going two miles away is bad luck, but it happens a lot.

Rather than placing the cost burden on the passenger, Uber could use some of the money saved on new driver bonuses to pay current drivers for these unprofitable portions of trips.

Graphic from an Uber email to drivers.

That’s messed up for drivers, and for passengers who live in rural or less popular areas where many drivers won’t accept their ride requests.

Why do drivers hate Pool rides?

An UberPool ride is usually the same amount of work for the driver for about half the pay.

Many drivers simply refuse to accept Pool rides, but this damages their acceptance rate, which can make them lose out on any incentives that Uber is running.

How could Uber supplement the earning rates on Pool rides?

One idea is to spend less on driver sign-up bonuses by building a platform that drivers don’t want to quickly quit using.

Another idea is to offer advertising slots that passengers could choose to view or not.

If you could choose to, while you wait for your driver to arrive, view an interesting video ad that was targeted to your interests, would you consider it?

Advertisers would pay a premium to get eyes on their targeted, measurable ads, and this revenue could be used to make UberPool rides worth accepting for drivers.

3. Add an automatic hourly guarantee for when traffic is bad.

I once spent an hour picking up a Lyft passenger from a train station and bringing her a few miles down the road in rush-hour traffic.

Grand total earned for the hour? Around $5.

Lyft had an hourly guarantee promotion running during that hour, but it required three rides per hour, which was impossible.

If an hourly guarantee kicked in once the passenger was in my car, this ride wouldn’t have been such a waste of time. 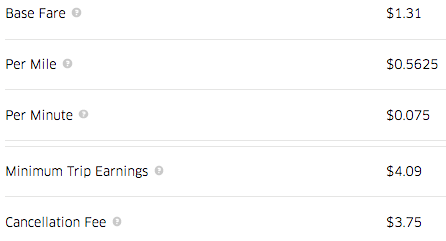 There you have it Uber.

Please comment if you have other ideas, or if you disagree with mine.