The trio finished their traditional number on the walkway in front of the outdoor tables of Restaurant Mercader, then two of them stepped back, one putting down his instrument to fire up a jukebox, and one stepping forward to begin a dance.

The sheer sass channeled into that dance was surprising.

Here are some other surprising things I learned on a recent visit to Huatulco:

1. It’s not all about Mexican food.

Huatulco also has a surprising concentration of great fusion restaurants.

It wasn’t until after we visited the restaurant near our hotel with the sassy dancer that we learned it is TripAdvisor’s top ranked restaurant in Huatulco.

I also received a gourmet platter from a little boy who was with his French-speaking family a couple of tables over:

A mile down the road in a more residential area is L’Echalote, where you can get a mix of Mexican and French food.

The owner there is a welcoming Frenchman who gave us, on the house, our first taste of Mezcal, a smoky Oaxacan spirit made from agave (Mezcal’s more famous sister, Tequila, is made specifically from the Blue Agave).

2. Great snorkeling, but not all bays have it.

When I dove into the water at Bahia de Tangolunda, I realized why few other people at that beach had their masks & snorkels: the surf stirs up the water there, so the snorkeling isn’t good.

A beach at Bahia de Tangolunda.

It’s the opposite at Bahia de Santa Cruz and Bahia de Entrega, where calmer waters and nearby coral reefs make for perfect snorkeling.

A low-key beach in Santa Cruz Huatulco with lots of fish.

Swim around this section of rocks on the water behind the marina gas station at Santa Cruz and you’ll likely find a beach you can have all to yourself:

Huatulco is known for its nine gorgeous bays, so I’d love to one day visit again and get to know all of them.

3. The best beach may be around the corner.

A few days into our visit we wandered one bay over from Santa Cruz and found Playa de Chahue, which had a fraction of the crowds of Santa Cruz, with double the beauty: 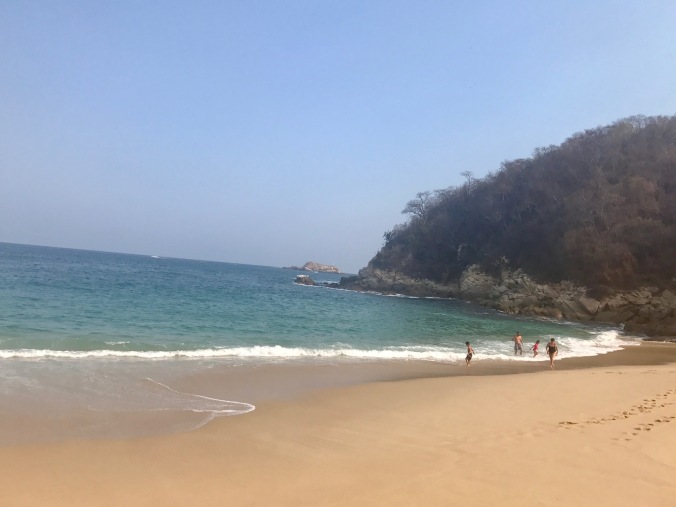 I’m guessing this empty beach doesn’t have an access road, but we got a good look at it on a boat tour:

It seems like anywhere you go, there’s a city claiming to be the craft beer HQ of the world.

They may not brew much beer in Huatulco, but a gastropub there has gathered a collection of Mexican craft beers that any beer lover would… love.

Another thing we didn’t realize until well into our visit? Taxis are very affordable.

About $1-5 American dollars (though you’ll pay in Pesos) to go almost anywhere in Huatulco.

If you’re not comfortable negotiating a taxi ride, you can also ask an employee at your hotel what the standard price would be for wherever you’re going, and they’ll often even call a taxi for you.

That’s what you’ll be saying if you try using Yelp to find good restaurants in Huatulco.

TripAdvisor and Google Maps are better, but they still don’t have many of the smaller restaurants.

This restaurant isn’t on Yelp, but it’s here that I saw one of the prettiest birds I’ve ever seen in the wild.

The photo isn’t great, but this bird had a headdress, a ringed neck, and a long, flowing tail feather:

7. Don’t assume the big-name resorts are the best.

We spent a night at a resort that was about 1/5 the nightly price of the more famous, all-inclusive resorts down the street (Dreams, Secrets).

The big-name resorts looked like cruise ships that’d been dropped on a beach, with lines of rooms smushed together, while ours looked like this:

I’m hoping to later do a review of our stay at Camino Real Zaashila, but here is the view from our room:

Here is my post on how I paid about 30% less than this hotel actually costed.

And one final tip that’s so small I won’t number it: find a Banamex ATM for withdrawing Pesos.

The Banamex ATM in Santa Cruz Huatulco costed about $4 less per withdrawal, for the same amount of money, than all the other ATMs I used.

If you have any tips to add, please comment below!

One thought on “7 Huatulco, Mexico tips you’d probably find in a guidebook if one existed”