Alaska Airlines has been storming through the world of points and miles this week in celebration of its merger with Virgin America.

They gave away 10k miles (worth about $100) to all its loyalty program members who were also part of Virgin’s loyalty program, and those who were Virgin members but not Alaska members received a choice of 10k Alaska miles or a $100-voucher for Alaska flights.

My brother was a Virgin America member but not an Alaska member, and here is the email he received: 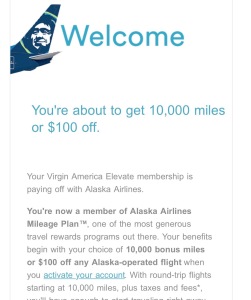 I was already a member of both loyalty programs, so the 10k Alaska miles were dropped into my account automatically.

The weird thing about my email from Alaska?

They thought they were upgrading me to elite status, even though I already had elite status thanks to the status match they gave me last year. 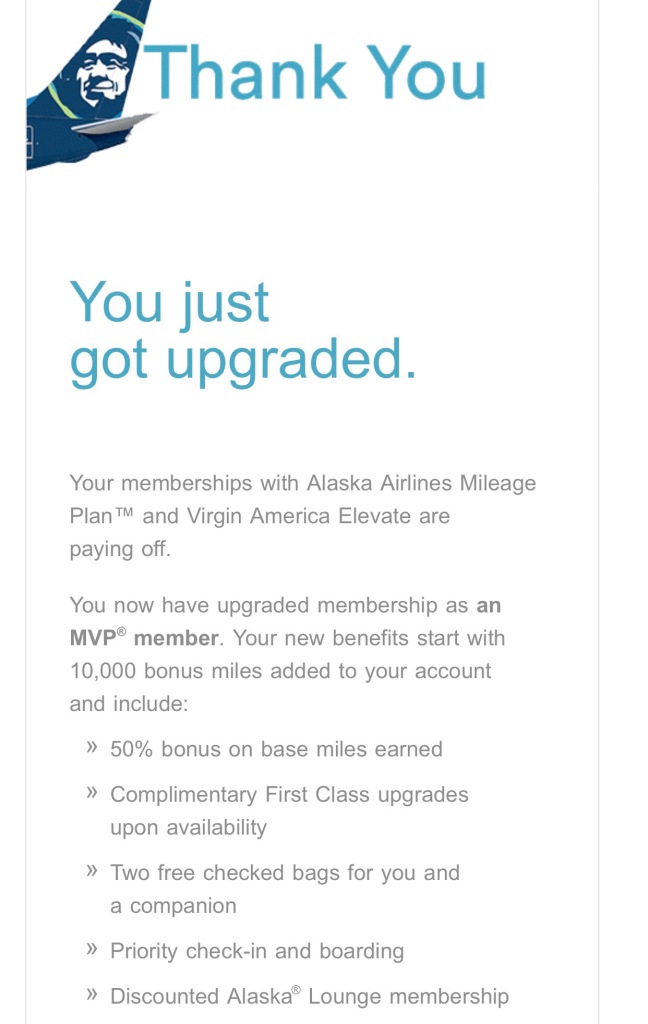 Sorry about the huge photo. It was either huge or tiny!

Alaska matched the status of any Virgin America members with elite status this week as well, so I’m guessing the robot that decides which email to send each person thought I was one of those.

In other news from this week, JetBlue became the first airline to offer free Wi-Fi on every flight.

I still don’t understand why this is taking so long to become the standard, but I’m excited that JetBlue is staying ahead of the game.

And the living legend of a credit card, the Sapphire Reserve, finally dropped its bonus for online applicants from 100k points to 50k points, though you can still get the 100k until March if you apply in a Chase bank.

We knew it wouldn’t last forever, but the bonus will live on in folklore forever, so we need not mourn.

I only regret that I wasn’t credit card chaste enough to get it myself.