A couple bits of news from the Frontier Airlines front.

First, they’ve extended the double and triple miles promotion I posted about earlier:

Speaking of that post, it appears USA Today coincidentally posted almost the exact same info I did a few days before them.

I usually tweet my posts, so this time I figured I’d tag in my tweet a USA Today writer I’d started following recently, along with a couple other travel blogs I follow.

One of the sites I tagged, Miles To Memories, saw my post and linked to it in one of his posts, including a credit to my site under the info he used. Much appreciated.

A few days later I saw this tweet from the USA Today writer who I also tagged: 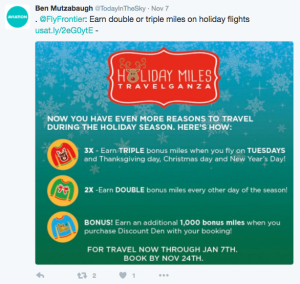 I try to never assume the worst about people, so I figured he hadn’t seen my tweet/post and just happened to independently uncover the same news I did a few days earlier. Happens all the time.

Even if he did see my headline but did his own research for his story, I wouldn’t be bothered. It’s publicly available information.

Upon reading through his story though, I noticed something that seemed beyond coincidental.

He used the exact same example flight I used in my post.

Here is my example:

Here is his example:

He rounded his numbers up, but seems to use the exact example I took from my flight experience. If these earnings numbers were publicly available I wouldn’t be concerned at all.

I did email the writer privately a couple of weeks ago asking if he could clear it up, but I haven’t gotten a reply.

After years of media law/ethics drilled into my head during college, I may be oversensitive.

Maybe an editor unknowingly removed his citation, or of course it could be a big coincidence, so onward with more Frontier news!

Frontier finally updated the fare sales page on its website

Frontier’s sales page has always been confusing and terrible.

After the update, the page is clear and simple, allowing you to filter by departure or destination location, share deals with your friends, and clearly determine the fine print of each deal.